“And, in this corner, Jerry Piddington”… was the title of an article written about Grandmaster Piddington in the 1974 issue of Karate Illustrated which he appeared on the cover.  Mr. Piddington was described in that article by his fellow karateka as one crazy dude, an animal, and a crazy animal that you needed a chair and a whip to fight.  A lifelong rebel who purportedly won one match by flustering his opponent with a kiss, Mr. Piddington is still turning heads with his long hair and bushy beard, which earned him the nickname — The Untamed Lion. 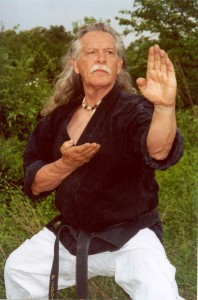 As a pioneer of American Sport Karate, Jerry Piddington traveled all over the country placing and/or winning every major tournament in the United States from 1972 to 1976, not only in fighting, but in kata competitions as well.  Mr. Piddington faced off against some of the top tournament competitors of the 1970’s — including Joe Lewis, John Natividad, Darnell Garcia, Bob Allegria, Steve Sanders, Jay T. Will, Artis Simmons, Joe Corley, Byong Yu, Ken Knudson, Everett Eddy, Roger Greene, Reily Hawkins, Jack Motley, Vic Guerro, Jeff Smith, and Pat Johnson — just to name a few.  He began his competitive career in 1969, winning the Four Seasons Karate Championships as a brown belt.  He later captained the five-man team which triumphed over the highly successful Chuck Norris-led team at the 1974 International Karate Championships in Long Beach, California.  Mr. Piddington held a long list of titles over the years and in 1973 was rated #9 in the USA and #1 in the Southeast by the Black Belt Yearbook and #12 in the USA by Professional Karate Magazine.  Mr. Piddington is still punching and kicking!  He recently participated in the Canada AM Championships and helped the American team defeat the Canadian team by scoring the winning point.

“I enjoyed fighting the bare-knuckle matches,” says Mr. Piddington. “In that era the fights were much tougher because there were no pads and head gear. The art of kime and control with good stances was an important part of how we fought, unlike today’s sport karate of jump and tag.” Mr. Piddington remembers some of his injuries: a broken thumb at the U.S. Team Championships in Long Beach, California, a broken jaw at Kang Rhee’s Nationals in Memphis, Tennessee, and a broken leg at the 1973 Grand Nationals in Anderson, Indiana.

Mr. Piddington has a martial arts career that spans five decades and has studied with some of the most famous martial artists in the world. His first teacher was Caylor Atkins, a Shotokan stylist. Mr. Piddington received his first black belt from Tom Crites in Shorin-ryu. Continuing his career, Mr. Piddington trained in Hawaiian Kenpo with Michael Stone, Japanese Goju-ryu with Chris Armstrong, Kempo with Ed Parker, and Shorin-ryu with Master Tadashi Yamashita. Mr. Piddington was also a student and friend of Robert Trias — Father of American Karate.