Ashland Karate Academy exists for the purpose of building stronger community members and families. The skills being taught in our Academy are meant to instill principles such as hard-work, integrity, attention to detail, positive thinking and the will to succeed in ANY circumstance. Although martial arts are considered an ancient tradition, its principles are timeless. We hope to impart the ability to have one eye on the past, while keeping one towards the future.

Behold, the days of honor and respect are still upon us. In an era driven by self-indulgence and shortcuts, there remains pockets of tribes that adhere to a set of guiding principles and selfless acts. This story is in recognition of one such tribe, the Ashland Karate Academy.

During July’s New Moon, the Ashland Karate Academy’s annual Black Belt Testing took place under the summer’s peak brutal sun. It was for these planned celestial occurrences that shaped the testing’s theme of “Sun & Moon”.

In ancient Sanskrit, the names for the Sun can be translated as steadiness, firmness, and strength of purpose. The Sun rises day after day regardless of weather conditions, the behavior of humanity or the placement of planets in the sky. It traverses its set path, always giving light and heat and asking nothing for itself in return. 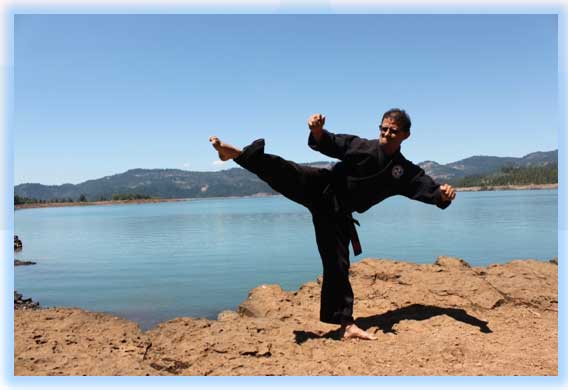 In India the Moon is said to rule the senses and emotions, as well as being fickle and changeable. Emotions change and fluctuate as our thoughts and attitudes change. Emotions vary with the circumstances of our lives, and with the positive or negative ways we perceive other people as treating us. Astronomically, the Moon we observe each night is cyclic. It waxes and wanes and finally disappears each month before it is reborn again. If it were not for the light of the Sun, we would not be able to see the Moon at all. This is why the principle of reflection belongs to the astrological Moon. (source http://www.snowcrest.net/sunrise/apolar1.htm)

Their relationship is Yin-Yang. It is about balance, strength, but also gentle reflection… 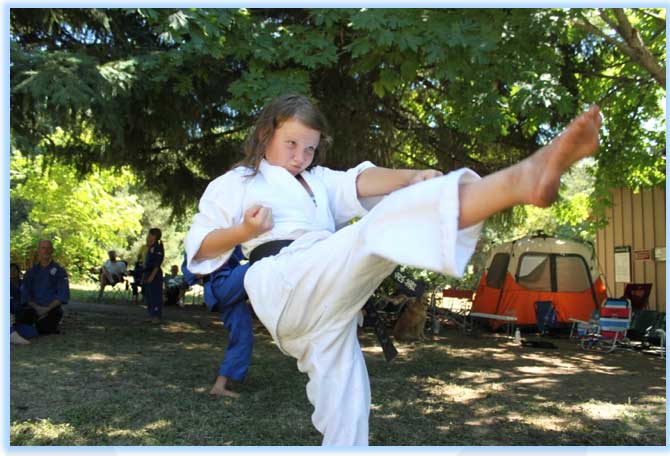 “AGAIN!” was the command most repeated as boys & girls, and men & women alike sweat, in unison, while performing kata in their sharp Gis. “AGAIN!”

Why are these people not only volunteering, but paying, for this summer heat-stroke holiday? To get exactly what they paid for, what else?! And what is it they are paying for?

A chance to demonstrate they have earned the honor and respect that comes with the right-of-passage when entering the Black-Belt Club at the Ashland Karate Academy.

This year’s gathering drew participants and spectators from the Carolinas, and all the way from Japan and Singapore. Spoiler-alert, it was well-worth the journey.

Three (3) grueling days were endured under the direct sunlight amidst the mountain lakes in the upper reaches of the Rogue Valley, as well as their accompanying sunrises, red sunsets, and slivered new moons. Early mornings were invigorated with exercise, meditation, katas and warm, fresh meals. Special thank you to our volunteer kitchen staff for all the nutritious and delicious spreads throughout the day – your Future is bright. 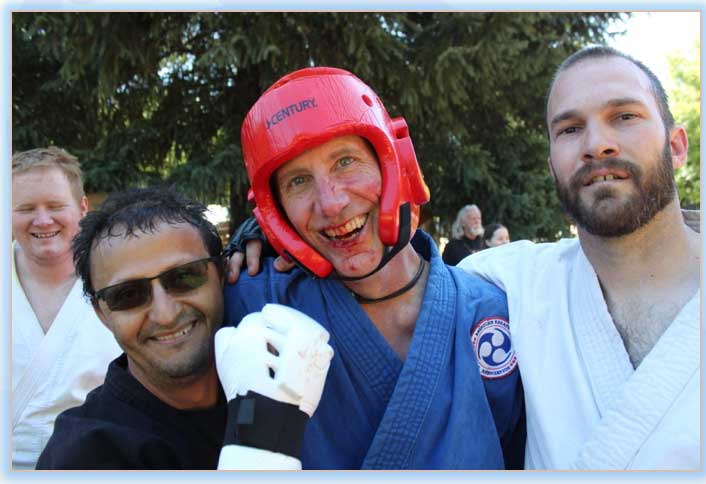 However, the character testing occurred in the heat – with sparring. Yes, there is no spirit without a fight, and there is no fight without a spirit. It is here, in this fighting moment, that we discover who we must face in the mirror. Are sparring partners are only mirrors, as the adversary is within. One must dig deep to have the mind take control of the body in order to exert force when it is all but depleted. You only have to see John Trivers’ face to know how much fun it is getting punched in the nose.

The afternoons were used best to collect the sun’s energy by demonstrating the human neuro-network’s incredible ability to recall all the various katas – repeatedly. It is the “extra” that fosters extra-ordinary. Without it, life is merely average, mediocre, and without purpose. The Kata is where you shield your mind from Automatic Negative Thoughts (ANTs) and focus on the present imaginary opponent(s) that you shadow with. Nun-chucks, bow-staff, sais, and iron fists were, and are, the weapons of choice. Mastering attention to detail and precision ensure strikes are meaningful and to prevent your own injury. Train like we fight, and fight like we train. 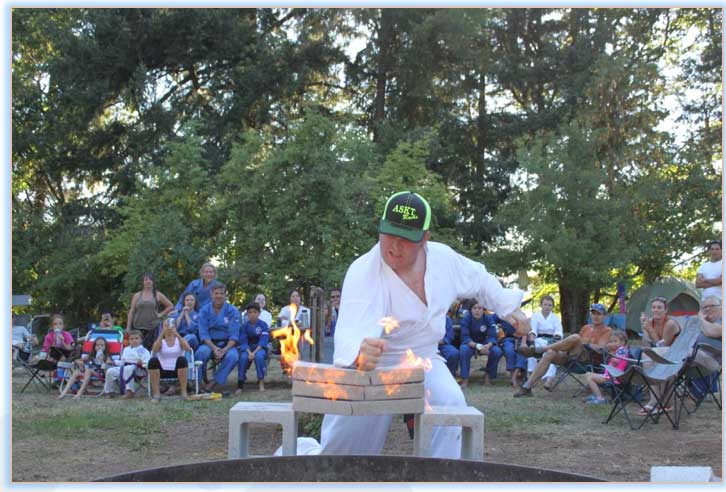 Evenings were used for honing advanced skill development. In the quest for self-confidence and self-reliance, using one’s own bare fists and feet to destroy wood and flaming cement is essential. To shatter your opponent’s will, you must first shatter your own boundaries. Punching candles and playing fruit ninja with live katana blades prepare the mind for the abstract through mindful participation.

But perhaps the best to activity witnessed was at the end of the day, when exhausted and depleted, the eager youth would request that the experienced elders show them more moves and help with their kicks. This was the essence of the Black Belt Testing. If for no other trait demonstrated – that will to persist is what earned them their passage